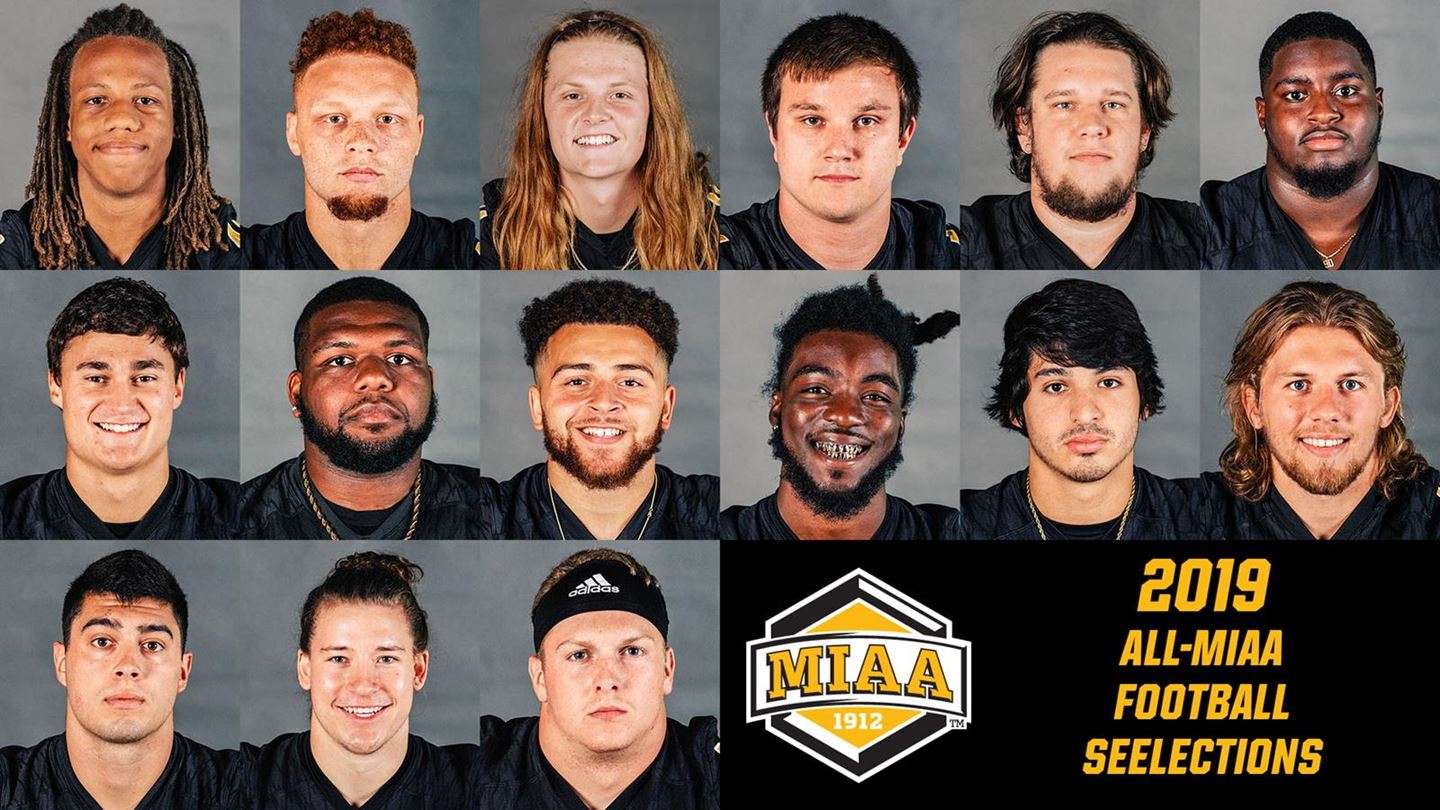 Brown, a senior from Mississauga, Ontario, is the MIAA Special Teams Player of the Year and a first-team selection for a second-straight season. He finished the year with 109 points converting 19 field goals and 52 PAT attempts. He is the only Tiger kicker in history to score over 100 points in a season, and did it two years in a row. Added to a school record 123-point effort last year, Brown finishes his career at FHSU with 232 points in just two seasons as the team's placekicker. That total comes up just 12 points shy of career-points record holder Drew O'Brien, who kicked for four years. By regular season's end, Brown ranked fourth in Division II for field goals per game (1.73) and 11th in points per game (9.9). This is the third straight year a Tiger wins the Special Teams Player of the Year, all with the same surname. Brandon Brown was the team's placekicker in 2017, who also earned the distinction. Last year, Brown was an All-America First Team selection at kicker by two organizations and the Don Hansen Football Committee National Special Teams Player of the Year.

Hazlett is now a three-time All-MIAA selection, receiving honors all three of his years on the field for the Tigers, and has been one of the most dynamic offensive players in the conference in that span. A senior from Abilene, Kansas, Hazlett finished the year with a team-best 1,095 all-purpose yards. Mainly utilized as a receiver, Hazlett led the MIAA in receptions per game (6.7, while ranking 13th in NCAA Division II. He ranked third in the conference in receiving yards with 861. He was also a threat rushing the ball with 128 yards, while also recording 106 kick return yards. Hazlett had 12 total touchdowns (9 receiving, 3 rushing) to lead the team. Hazlett even threw the ball one time for a 20-yard touchdown pass. Hazlett became the eighth receiver in FHSU history to reach 2,000 receiving yards, going past the mark in the final game of the season. He finished with 2,038 at FHSU, accounting for more than two-thirds of his 2,738 all-purpose yards. He owns the FHSU record for career receptions with 184.

A sophomore from Arlington, Texas, Fuller put up big numbers in his first full year as a starter for the Tigers at quarterback. The MIAA featured three of the top five passers in the nation during the regular season, Fuller being one of the three by ranking fifth in the nation with 3,344 yards. MIAA Offensive Player of the Year Brook Bolles of Central Missouri was the nation's leader at 3,660 yards. Fuller broke the FHSU record for passing touchdowns in a season with 35, previously set by Shawn Behr in 1995 with 34, and he ranked fourth in the nation in passing touchdowns by the end of the regular season. He ranked 14th nationally in completion percentage (258-of-400) at 64.5 percent. Fuller has been consistent, completing 65 percent of his passes and throwing for 8.4 yards per pass two years in a row.

Hoekman is now a three-time All-MIAA selection as a defensive back. He closed out his career as a Tiger with 294 tackles, finishing sixth on the career tackles list for the program's NCAA Division II era. The Abilene, Kansas senior started all 47 games he played at FHSU as one of the bandit backs on defense. This year he finished second on the team in tackles with 83, while tying for the team lead in interceptions with three. He added five pass breakups. Aside from nearly 300 career tackles, he added 15.5 tackles for loss, eight interceptions, 12 pass breakups, and five fumble recoveries over four seasons.

Hessing, a native of Stuart, Florida, earns second team honors in his first year at FHSU. The Arizona Western Community College junior transfer was a key addition to the line this year at right tackle, helping the team produce a new record for points in a season (455). FHSU averaged 41.4 points per game, which ranked fourth among high-octane MIAA offenses but was still good enough to set a new school mark. Hessing helped the team produce 5,342 yards of total offense, averaging 485.6 yards per game.

Sanders receives all-conference honors for the first time in his career at FHSU. The Largo, Florida junior started all 11 games at defensive tackle, producing 24 tackles. He helped FHSU limit opponents to 355.1 yards per game, which ranked third in the MIAA.

A senior from Claflin, Kansas, Bieberle is now a four-time All-MIAA selection, this being his third selection as a receiver. He was both an all-conference receiver and punt returner last year, and earned an all-conference nod at receiver as a freshman. This year, he produced 40 catches for 741 yards and six touchdowns, while accumulating 208 punt return yards. He averaged a team-high 18.5 yards per catch. Bieberle etched his name in the FHSU record books, finishing second on the career receiving yards and receptions lists, and third in receiving touchdowns, while owning the career punt returns and punt return yards records. Early in the season, he became the seventh receiver in school history to attain 2,000 receiving yards in a career. Bieberle finished with 2,625 receiving yards and 21 touchdowns on 168 receptions over four years, while adding 808 punt return yards on 87 attempts. Bieberle had 3,433 all-purpose yards in his career, 10th most for a career in Tiger history.

Angram-Boldin, a junior from Pahokee, Florida, picks up the second All-MIAA honor of his career at FHSU. A third-team selection this year, he received second-team honors in 2018. He started all 11 games at left guard, a position he has anchored the last two years. Like Hessing, Angram-Boldin helped the Tigers average 41.4 points and 485.6 yards per game this season.

Serving as starting free safety, Starks put up solid numbers on defense to earn his first all-conference nod. The Tulsa, Oklahoma sophomore finished third on the team in tackles with 78, while leading FHSU in solo stops with 45. He tied for the team lead in interceptions with three. He reached double figures for tackles in a game three times this year.

A senior from Glennville, Georgia, Tigner received the third All-MIAA honor of his career. He was a third-team selection in both 2017 and 2018. Tigner was the team leader in rushing yards this year with 740, while adding 290 receiving yards. He ranked second on the team in all-purpose yards with 1,030. Tigner ranks 10th on the career rushing yards list at FHSU with 2,327 and ninth in all-purpose yards with 3.473.

Ramsey gave the Tigers quite the receiving trio this season, helping FHSU have three receivers finish with more than 700 yards this season. Ramsey was second on the team in receiving yards with 808, hauling in 47 passes and a team-high 10 receiving touchdowns to warrant the first all-conference honor of his career. He averaged 17.2 yards per catch, giving FHSU two receivers that averaged more than 15 yards per catch. The Canadian, Texas sophomore had over 100 receiving yards in three games this year.

Kreutzer picked up the first all-conference honor of his career. The Hays senior was the counterpart of Hoekman at bandit back this year, ranking fifth on the team in tackles with 69. He also added in two interceptions and five pass breakups. Kreutzer finished with 102 tackles in his career, recording well over half of the total this year. He had three interceptions over his four years as a Tiger.

Trachsel receives an All-MIAA Honorable Mention nod for the third straight year at linebacker. The Goodland, Kansas senior finished the 2019 season with 72 tackles, which including three tackles for loss. He finished with 191 tackles, including 13 for loss, five sacks, and two interceptions in his four years on the field at FHSU. Schmidt earns an All-MIAA nod for the first time in his career on the defensive line.

Schmidt led FHSU defensive linemen in tackles this year with 43 and sacks with four. The La Crosse, Kansas senior recorded 126 tackles, 22 tackles for loss, 12 sacks, and six fumble recoveries in his four years on the field for the Tigers.

Wendelberger is now a four-time All-MIAA performer at tight end. Though he battled through injury for a good portion of the season, the Pewaukee, Wisconsin senior still managed to record 131 receiving yards on 15 catches with two touchdowns. Wendelberger's presence on the field was key for the Tiger offense, especially when throwing key blocks to spring free Tiger backs and receivers. He finished his career with 85 catches for 1,048 yards and eight touchdowns.

The 2019 All-MIAA Football Teams are below.