Hays held Great Bend scoreless for the first 7:55 of the game.  The Indians though were only able to build a 7-0 lead during that stretch.  The Panthers first points came from a three pointer with five seconds on the first quarter clock.

That three sparked a 20-4 run that built a nine point lead for the Panthers with four minutes to go in the second quarter.  Trailing 20-11, Hays held Great Bend scoreless for the next 3:59 seconds.  However Hays only made up three points of the deficit from the free throw line during that stretch.  Great Bend nailed a three at the buzzer for another nine point lead at 23-14.

Hays led for only 2.3 seconds in the second half.  Fortunately for the Indians it was the final seconds of the game.  Great Bend led by by no less than five for the entire third quarter and entered the fourth up 31-26.

The Indians led Great Bend without a fourth quarter field goal.  The Panthers though made five of seven free throws over a seven minute stretch to remain up by two with :56 left.

Hays stayed in the game with ten straight second half points from Aleyia Ruder who went on to tie a career high with 16 points.

The final moments game down to free throws.  Great Bend went 0-4 in the final 22 seconds.  The first two misses with a two point lead.  Hays made just one of four chances with under ten seconds remaining to close the gap down to 36-35.  The Panthers then missed two more free throws with 3.5 seconds left and fouled Tasiah Nunnery on the second miss just after rebounding the ball.

Nunnery, who is the best free throw shooter on the team, made two free throws wrapped around a Great Bend timeout.  The Panthers last chance heave came after the final buzzer.

Hays and Great Bend got after each other from the opening tip.  The lead changed hands four times in the first five minutes and was tied twice more.

The Indians used a 9-0 run on four straight field goal makes for an 18-12 lead at the end of the first quarter.  The Indians never trailed in the second quarter and led by as many as eight at one point 33-25.  Great Bend closed the gap down to six by half time at 35-29.

The Indians led the entire third quarter by at least three points and 47-42 heading to the final eight minutes.

The Panthers used an 11-2 run to take their first second half lead on back to back field goals from Alex Schremmer.  Hays trailed 56-52 with 3:30 before setting out on a 10-3 run.  Jace Linenberger made one of two free throws to start the run.  Dylan Ruder rebounded the miss on the second attempt and scored.  Carson Kieffer scored a layup, Dylan Ruder added a second basket in the run and Jason Krannawitter finished the run with a step back three pointer for a 62-59 lead with one minute remaining.

Hays would not trail for the remainder of the game.  Great Bend buried a pair of free throws to cut the Hays lead down to 62-61 with forty-one seconds left.  Kieffer was fouled moments later and missed the front end of a one and one opportunity.  Ruder however was there to clean up the miss and put the ball back up and in for a 64-61 lead with thirty seconds remaining.

Great Bend had one last chance after getting fouled after a three point attempt. They needed to make a free throw and miss the last for a chance to tie with seven tenths of a second left.  The second free throw however never touched rim and allowed Hays High to inbound and win 64-62.

Hays is on the road to Garden City on Friday. 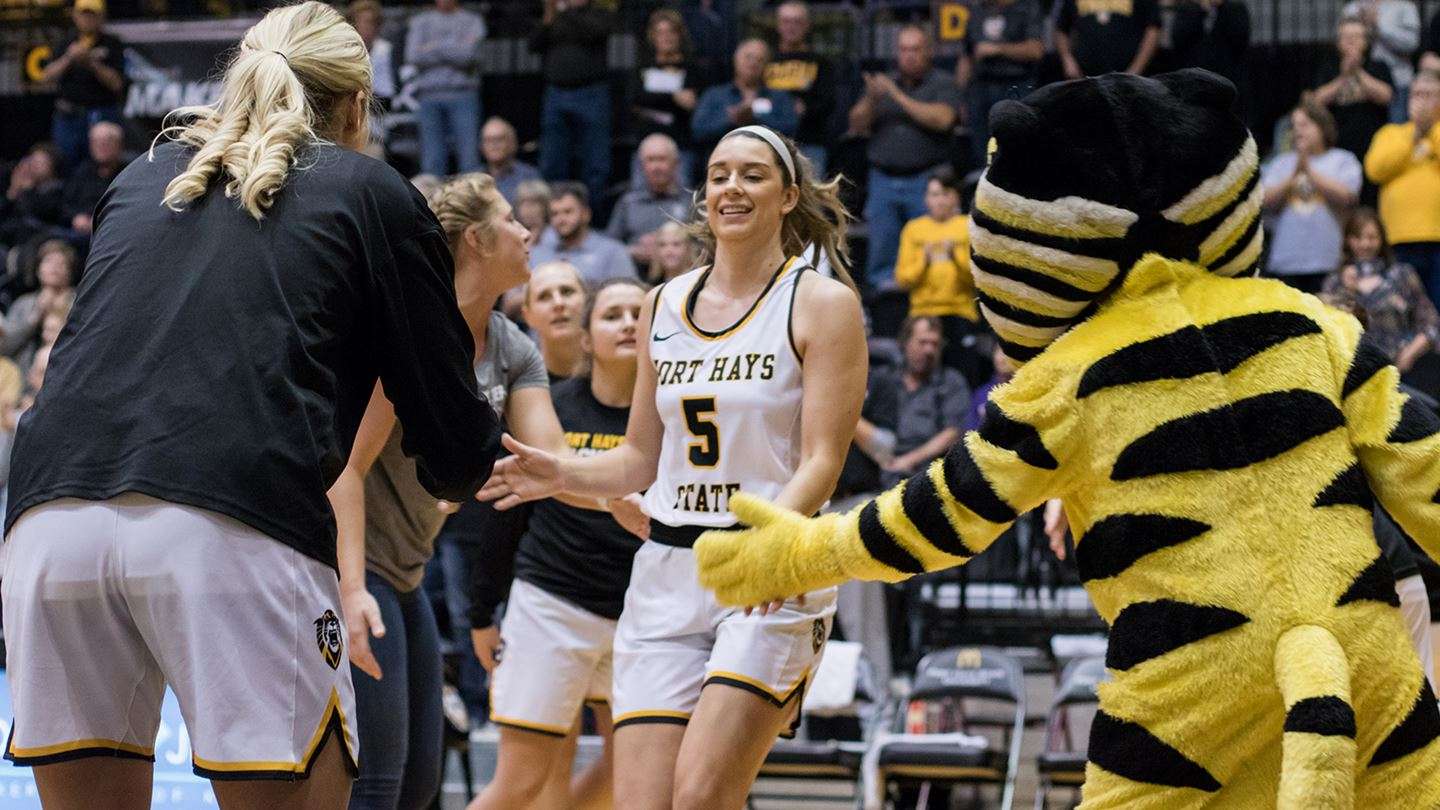 After playing more than 28 seasons of Division II basketball without being ranked 13th in the country, the Fort Hays State women's basketball team now occupies that spot in the WBCA Coaches Poll for the second week in a row, announced Tuesday.

The Tigers (13-2, 4-2 MIAA) picked up three wins since the last poll was released, holding off Pittsburg State at home before earning a pair of road victories over Northeastern State and Rogers State. FHSU's point total in the balloting process rose three points this week, up to 310.

Emporia State, the lone other MIAA representative in the polls, moved up one spot to No. 15 in the coaches poll while holding on to the No. 16 spot in the media ranks.

The Tigers and Lady Hornets will face off in a top-15 battle Wednesday evening inside Gross Memorial Coliseum, with the opening tip set for 5:30 p.m.