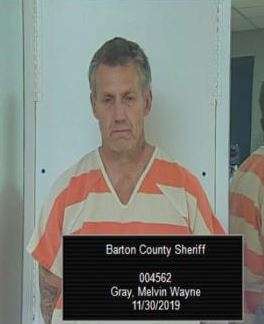 A 2007 GMC Yukon was stopped for an equipment violation, and a passenger in the vehicle was identified as Melvin Gray, 51, Great Bend.

Gray had outstanding warrants from Rush County. The sheriff’s office K9 officer, Maxx, was at the scene and indicated the presence of controlled substances, Bellendir said, adding that methamphetamine and marijuana allegedly were located.

Gray was transported to the Barton County jail on suspicion of possession of methamphetamine with intent to distribute and possession of marijuana. He is being held in lieu of a $50,000 bond.

Gray is also being held for Rush County on an outstanding warrant with a bond of $25,000. He has more than two dozen convictions for theft, burglary, identity theft, aggravated escape from custody, forgery and drugs, according to the Kansas Department of Corrections.