Remains of ancient shark from Kan. set for display at Sternberg

Teeth from an ancient shark that once swam in the ocean that covered Kansas were discovered in Mitchell County in 2010. Courtesy: Sternberg Museum of Natural History

Parts of a prehistoric shark skeleton, the only specimen of its kind found in North America, will soon be on display at Fort Hays State University.

The nearly 17-foot long cretaceous shark was discovered in Mitchell County, about 70 miles northwest of Salina. The Cretaceous period was roughly 66 million to 145 million years ago.

The fossils were found by Mike Everhart, Fred Smith and Gail Pearson in 2010. The three were searching for bone fragments when Smith found vertebrae pieces of the shark encased in limestone.

With the help of DePaul University biological scientist Kenshu Shimada, Everhart and his team identified and named their fossil findings to be a unique specimen of shark — the Cretodus houghtonorum. 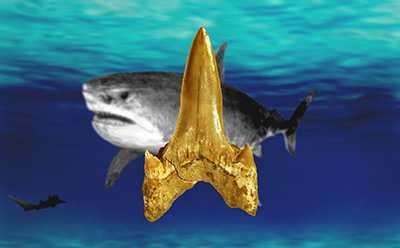 An artist's rendering of the species of shark that swam in the ocean covering Kansas millions of years ago. Courtesy: Sternberg Museum of Natural History

Everhart says the specimen is an important find for Kansas because it is one of only two discovered in the world; the other is a full skeleton in an Italian museum.

The teeth of the specimen were unique and did not match others on record. Everhart says the teeth were crucial in identifying the specimen and have helped paleontologists better identify other fossils.

“In paleontology, we kind of live for these things,” Everhart says.

The name for the Cretodus houghtonorum shark stems from an odd coincidence: Everhart and his team found their fossils on Keith and Debora Houghton’s ranch. Another tooth of the same specimen was found in the 1850s in Houghton, England.

Parts of the vertebrae and teeth of the shark will be on display at the Sternberg Museum of Natural History at Fort Hays State within the next month.

Mya Acosta is an intern in the KMUW News Lab.