Teacher of the Month: Holopirek helps students reach their potential 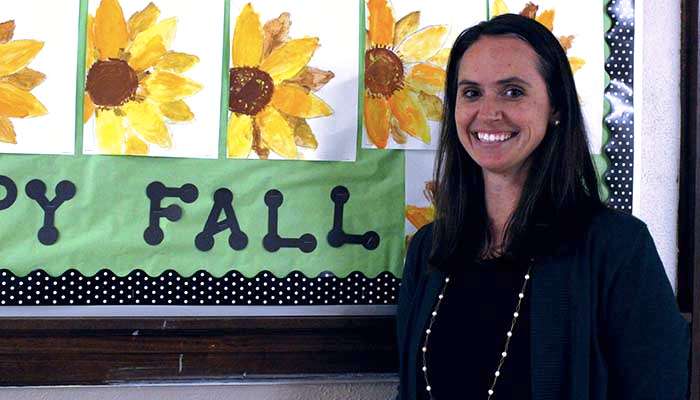 Rachel Holopirek, third-grade teacher at La Crosse Elementary School, outside of her classroom in front of sunflowers her students painted. She is November's Hays Post Teacher of the Month.

LA CROSSE — Rachel Holopirek gives her all to her students, and she expects their all in the classroom.

Holopirek, a third-grade teacher at La Crosse Elementary School, was nominated for what her nominator said was a rare gift to capture and excite her students. The person who nominated Holopirek sang her praises but wished to remain anonymous.

"I witness students sitting at the edge of their seats in her class listening intently to directions and the next activity," the nominator said. "Their eyes are wide with excitement, and they are not only engaged but having fun learning with one of her many project-based learning activities."

Holopirek does little lecturing. Her students are usually moving around the room engaged in activities.

Holopirek said she believes if she has high expectations of her students, the students will be high performers. It is something that she values in her teachers growing up.

Holopirek's nominator said her students want to reach their goals so they don't disappoint her.

However, Holopirek said she knows children sometimes have challenges that make it difficult for them to concentrate and make the most of their learning during the school day.

She said it is about seeing a student as a whole person.

Her nominator noted Holopirek spends time before and after school helping students with school work and personal needs.

Holopirek, 35, grew up in Peabody in a farm family. She has only been teaching elementary school for four years. She has an undergraduate degree from the University of Kansas in Unified Early Childhood Education, which allows her to teach birth through third grade. Before she came to La Crosse Elementary, she was director of the Tiny Steps preschool in La Crosse. She also has a master's degree in special education from Fort Hays State University.

Holopirek didn't originally set out to be a teacher. She was studying child psychology, but some of her mentors urged her to pursue education instead.

"I can remember my elementary school teachers," she said. "At the time, I didn't know the impact they were making in my life, but looking back, I know that they pushed me harder than I was achieving at that point and made me reach my potential. That was the teacher I wanted to be.

"I want to set high expectations and push my students to reach their potential as learners."

Summer Moeckel, a former Victoria teacher, has been one of Holopirek's greatest mentors. She said she was a very hands-on teacher, which is something to which Holopirek also aspires.

One of the students' favorite activities is an economic lesson. The class takes out a loan from the bank. A bank official visits the class. The class uses the loan to buy ingredients for trail mix, sets up an assembly line, sells the trail mix and donates the profits to a cause of the students' choice.

The students have donated money to their public library and school library. Last year's class donated their profits to the La Crosse pool.

Holopirek also brings outside resources into the school to provide hands-on activities. The high school physics class teaches a lesson to the children. The day Hays Post visited, the class had a visit from the Wetlands Education Center. They also invite in experts from the Sternberg Museum of Natural History.

"I just think there are so many resources outside of the classroom. Introducing those things to these students [is important]," she said. "In their lives, they might have a chance to go to those places, so being able to provide those in the classroom is big."

"As a teacher, it is our job and responsibility to make sure the instructions we are giving are done in multiple forms, so each child has the chance to succeed.

"One of the things parents are most concerned about is the way we teach math now. Many call it Common Core. The idea is that we are teaching kids multiple ways to get to an answer and not giving them just one path in hopes each child will find a path that is right for them."

Holopirek also has high standards for her students when it comes to behavior.

"I have high expectations of how a student should behave inside the classroom, and I have been so impressed because even though I do set a high standard, I have't had a student who hasn't reached that. ... If they know you truly care about them, they will perform."

She also works closely with families to support students.

Because Holopirek has taught both her oldest child and is teaching her middle child now, she knows many of the children in her class beyond school.

"I want to be a sense of comfort for those kids while still respecting their homes and their families," she said.

Holopirek's husband teaches science at La Crosse High School. She said she and her husband make it a point to attend sporting and arts events in support of all the students in the school district. She has also helped organize teams in La Crosse that participate in Hays Recreation Commission leagues.

"It is a priority of ours to let all of the USD 395 students know we care about them more than just inside the classroom," she said.

When Holopirek was working with toddlers, she said she knew she made an impact on those children's lives, but they were too young to remember.

"I am now teaching the students who I had as infants and toddlers, and they don't always remember the ones who made a difference when they were at a younger age.

"I remember my third-grade teacher. ... I just hope some of the students will remember and look back at their elementary school teachers and know that they helped them develop into who they are because those are their critical years of development."