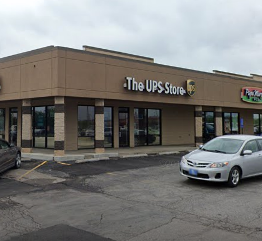 (The UPS store Watkins lists as his mailing address-google image)

TOPEKA, Kan. — A Kansas congressman who is being investigated by local authorities for listing a UPS Inc. store as his residence in registering to vote has changed his registration to name a Topeka apartment complex as his home.

Republican Rep. Steve Watkins is still listing the UPS store in southwest Topeka as his mailing address after naming an apartment complex about 2 miles to the north as his residence in a registration form dated Friday.

The Associated Press obtained a copy Monday through an open records request filed with the Shawnee County election commissioner's office.

Some Republicans in Watkins' eastern Kansas district already are trying to oust him. The freshman congressman faces a challenge in the GOP primary in August 2020 from State Treasurer Jake LaTurner, who jumped into the race after former GOP Gov. Jeff Colyer urged him to do so.

The Shawnee County sheriff's department is investigating whether Watkins broke state elections laws by listing the UPS store as his residence on a form he filed in late August and voting in the Nov. 5 election. Watkins' ballot included a City Council race, and the apartment complex is outside that council district.

His new registration form leaves blank a box for saying when the residence at the apartment complex was established, and Jones has not responded to messages from the AP seeking his move-in date. The form also doesn't list an apartment number.

The sheriff's office did not immediately return a telephone message seeking an update on its investigation. It would turn its findings over to Shawnee County District Attorney Mike Kagay. Both Kagay and Sheriff Brian Hill also are Republicans.