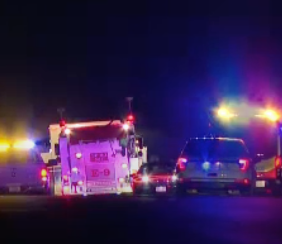 Just after 9:30p.m. Saturday, deputies and fire crews responded to report of a two-vehicle crash and fire at Southwest 50th and Haverhill Road five miles south of El Dorado, according to Sheriff Kelly Herzet.

When deputies arrived, they found both vehicles fully engulfed in flames, numerous bystanders and a lot of debris from the crash.

Investigators have determined a Ford Edge was northbound in the southbound lanes of Haverhill Road at a high rate of speed and struck a southbound Chevy Impala.

The impact was so severe that it flipped the Ford onto its top, according to Herzet.

Three victims were burned beyond recognition and pronounced dead at the scene. Until autopsy is completed, the sheriff’s department won’t release identities of the victims.