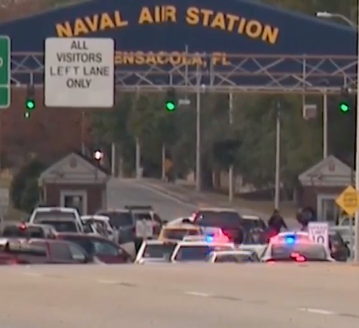 PENSACOLA, Fla. (AP) — The Saudi student who fatally shot three people at a U.S. naval base in Florida hosted a dinner party earlier in the week where he and three others watched videos of mass shootings, a U.S. official told The Associated Press on Saturday.

One of the three students who attended the dinner party videotaped outside the building while the shooting was taking place at Naval Air Station Pensacola on Friday, said the U.S. official, who spoke on condition of anonymity after being briefed by federal authorities. Two other Saudi students watched from a car, the official said.

The official said 10 Saudi students were being held on the base Saturday while several others were unaccounted for.

U.S. officials had previously told the AP they were investigating possible links to terrorism.

The student opened fire in a classroom at the base Friday morning, killing three people.

A U.S. official who spoke to The Associated Press on condition of anonymity on Friday identified the shooter as Mohammed Saeed Alshamrani. The official wasn’t authorized to discuss the matter publicly. The official also said the FBI was examining social media posts and investigating whether he acted alone or was connected to any broader group.

The assault, which prompted a massive law enforcement response and base lockdown, ended when a sheriff’s deputy killed the attacker. Eight people were hurt in the attack, including the deputy and a second deputy who was with him.

Family members on Saturday identified one of the victims as a 23-year-old recent graduate of the U.S. Naval Academy who alerted first responders to where the shooter was even after he had been shot several times.

“Joshua Kaleb Watson saved countless lives today with his own,” Adam Watson wrote on Facebook. “He died a hero and we are beyond proud but there is a hole in our hearts that can never be filled.”

Florida U.S. Sen. Rick Scott issued a scathing statement calling the shooting — the second on a U.S. Naval base this week — an act of terrorism “whether this individual was motivated by radical Islam or was simply mentally unstable.”

During a news conference Friday night, the FBI declined to release the shooter’s identity and wouldn’t comment on his possible motivations.

“There are many reports circulating, but the FBI deals only in facts,” said Rachel L. Rojas, the FBI’s special agent in charge of the Jacksonville Field Office.