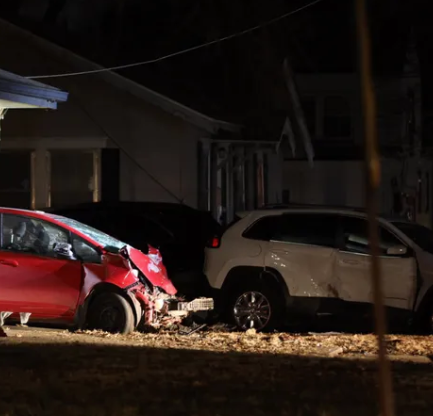 SEDGWICK COUNTY — Law enforcement authorities are investigating an auto theft and have a suspect in custody after a chase and crash.

Just before 10p.m. Thursday police observed a 2010 Honda Fit in the area of 2000 South Bluff View that had been reported stolen, according to officer Charley Davidson. Police attempted a traffic stop but the driver identified as 24-year-old Heaven Westendorff accelerated and fled from the officers.

During a short vehicle pursuit, the Honda collided with a Jeep parked in a driveway and an attached garage at a home in the 3100 Block of East Gilbert, according to Davidson.

There were three others in the vehicle. A 17-year-old boy who fled and was later found by officers and transported along with a 20-year-old man to a local hospital for treatment. A 19-year-old woman in the car was not injured. There were no injuries to those at the residence.

WICHITA, Kan. (AP) — A driver crashed into a Kansas home while fleeing from police.

KAKE-TV reports that the chase ended around 9:30 p.m. Thursday in the southeast part of Wichita.

Witnesses told the television station that officers were chasing a car when it crashed into two parked vehicles and the garage of a home. The suspect identified as 24-year-old Heaven Westendorf fled, and officers used a police dog to track her.

She is being held on requested charges that include flee and elude and numerous traffic violations, according to online jail records.

No information was released about what led up to the crash or whether anyone was injured.