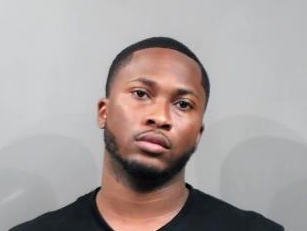 Emanuel E. Goines, Jr., 30, Wichita, was convicted on one count of unlawful possession of a firearm by a felon.

Officers learned Goines was present at the homicide, along with Quantezz Butler, another known gang member.

On June 25, 2019, Wichita police were looking for Butler to question him when they saw live video clips on social media showing four men in a Trailblazer who were attending the funeral of Freddy Trezvant, another known gang member.

Officers tried to stop the Trailblazer, which pulled away. During a pursuit, Goines was seen jumping out of the car and running behind a house at 1528 N. Belmont.

He appeared to be carrying a gun. Police lost sight of Goines until they saw him walking hurriedly near 14th and Broadview, where they arrested him. They recovered a handgun from the backyard of 1528 N. Belmont.