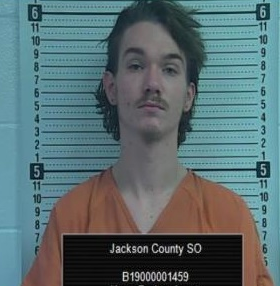 Just before 5 p.m. Friday, a deputy sheriff attempted to stop a vehicle for a traffic infraction near 158th and R. Road on the south edge of Mayetta, according to Jackson County Sheriff Tim Morse.

The vehicle then fled northbound through the City of Mayetta and north on R. Road.

The vehicle came to a stop and the four occupants surrendered to law enforcement. Two of the vehicle’s occupants were taken into custody. The driver, a juvenile, was arrested for possession of a hallucinogenic drug, possession of drug paraphernalia, felony fleeing and eluding a law enforcement officer and reckless driving, according to Morse.

In addition, the juvenile had been entered as a missing person and had an outstanding felony warrant out of Shawnee County for vehicle burglary and theft of a firearm.

The adult identified as Dathan Aaron Horn, 18, of Topeka was arrested for possession of a controlled substance and possession of drug paraphernalia. The two remaining occupants were released at the scene.