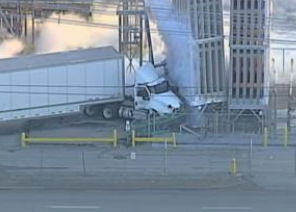 KANSAS CITY, Kan. (AP) — Fire department crews have evacuated an area near an industrial plant after a tractor-trailer crashed into a liquid oxygen unit in the Fairfax district of Kansas City, Kansas.

Police say the truck driver had a medical episode which led to the crash. The driver is hospitalized and in stable condition.

The fire department said shortly before 5:15 p.m. the oxygen leak was shut off.