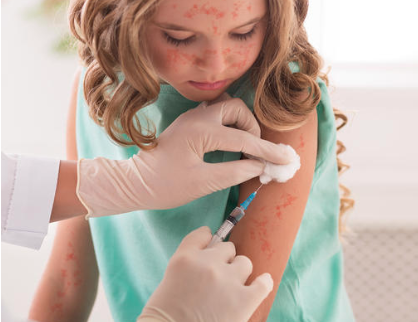 The child, identified as W.B., and his parents, Zach and Audrey Baker, sued the Crossroads Academy and Missouri’s health agency, the Department of Health and Senior Services, over the language in the official form.

The Bakers objected to wording encouraging parents to immunize their children. But Senior U.S. District Judge Howard Sachs rejected their argument that by requiring them to sign the form, the state was engaging in “compelled speech.”

“The State’s freedom to advocate vaccination as governmental policy is also well settled,” Sachs wrote in a 10-page ruling Friday denying the Bakers’ request for a preliminary injunction. “The official form containing modest advocacy is divided into parts which separate the advocacy language by the State from the wording to be used by a parent claiming an exemption. It thus passes muster as constitutionally acceptable.”

Missouri law requires students to be immunized, subject to exemptions based on “religious beliefs or medical contraindications.” All 50 states and the District of Columbia have laws requiring specified vaccines, and all of them grant exemptions for medical reasons. Forty-five states and Washington, D.C., grant religious exemptions and 15 states also allow philosophical objections.

Sachs noted that the Bakers could still fill out an official exemption form to exempt their child from vaccination. Any harm resulting from W.B.’s suspension from school, he wrote, would be the parents’ fault.

Sachs deferred his ruling until Dec. 16 to give the Bakers a chance to secure an exemption for W.B. if they wish.

W.B.’s grandfather, Stilwell, Kansas, attorney Linus Baker, represents the family in the lawsuit, as well as three other families.

He also represents another grandchild, whom he has since adopted, in a similar case in federal court in Kansas. That case is pending.

Reached for comment on Sachs’ decision, Baker said that he disagreed with the ruling.

“He (Sachs) clearly said that (the Department of Health and Senior Services) was targeting these parents and trying to convince them of the government’s message, in contradiction of their religious beliefs,” Baker said. “He said they don’t have to be neutral.”

An overwhelming number of studies have demonstrated the safety and effectiveness of vaccines in saving lives and preventing disease.

Dan Margolies is a senior reporter and editor at KCUR. You can reach him on Twitter @DanMargolies.