LAWRENCE — Noninvasive seismic techniques developed at the Kansas Geological Survey to locate abandoned mines in Kansas also have been used to detect drug runners’ tunnels in the Southwest, clandestine tunnels in war zones and other subsurface structures. To further advance the technology, the KGS has been awarded $2.54 million by the U.S. Department of Defense.

The funding will be used to evaluate the KGS approach to deeper tunnel detection and to advance the current technology, focusing on improved seismic data quality and detection efficiency. Overall performance of the KGS’s upgraded technologies will be tested above known tunnels in the United States and abroad. 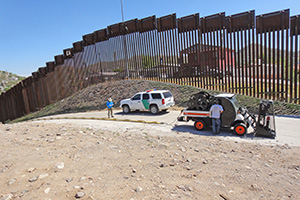 “We were originally targeting abandoned coal mines in Kansas with this approach back in the mid-1980s,” said Rick Miller, geophysicist and head of the KGS Exploration Services section. “The Army became interested in what we were doing and engaged us in tunnel detection research at sites with tunnels and geology analogous to Korea in the late 1980s and along the U.S.-Mexican border in the early 2000s.”

Using noninvasive seismic technology, geophysicists bounce sound waves off underground rocks and structures by creating vibrations on the surface with specially equipped vehicles or explosives. Because the waves travel through different rock types, sediments, fluids and voids in distinct ways, the recorded measurements are used to interpret subsurface conditions and material properties. Miller and his KGS colleagues continually develop and upgrade tools and techniques to overcome limitations of traditional imaging methods. 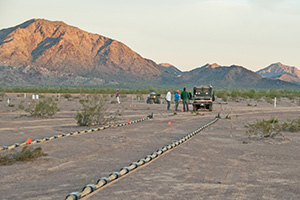 In Arizona, a 30-foot-deep tunnel was installed at the U.S. Army’s Yuma Proving Ground based, in part, on work by KGS scientists. At that facility, KGS has been developing and evaluating many of its advanced tunnel detection approaches for arid settings since the early 2000s.

To assess the capabilities of their enhanced technology — an expansion of the KGS technology known as active seismic imaging — KGS geophysics researchers will evaluate data acquired at an overseas test site, where the tunnel is more than 60 feet below ground. Current proven capability for detection of covert tunnel by the KGS researchers is about 30 feet deep. The team also is aiming to improve the quality of the seismic data, and consequently detection confidence, while increasing the speed at which the data is collected.

“Kansas really benefits from projects like this,” Miller said. “We develop methods and equipment on sponsor dollars that address the sponsor’s unique needs and then directly apply those capabilities to hazards in Kansas in a fashion not possible with state dollars alone.” 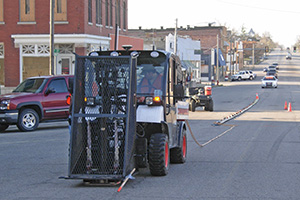 Near-surface geophysics has many practical applications related to geology, groundwater, oil and gas resources, mining, engineering, archaeology and environmental hazards, and KGS technologies have been used for various projects in Kansas and other states.

In 2001, a sinkhole formed near the Kansas-Oklahoma state line south of Baxter Springs, causing concern that it could destabilize State Line Road if the subsidence was related to an old lead and zinc mine shaft, Miller said. A predecessor to the ASI system detected the mine shaft, which allowed for evaluation of road stability. 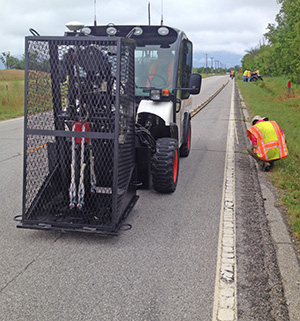 Seismic system collecting data along U.S. Highway 69 one mile north of the Oklahoma/Kansas state line and immediately east of Treece.

Prospectors dug and abandoned hundreds of mine tunnels south of Baxter Springs and under the town of Galena in southeast Kansas in the late 1800s, and lead and zinc mining continued in the area until 1970.

In 2009, the KGS used the same method in Galena as they had near Baxter Springs, along with exploratory drilling, to identify subsidence-susceptible areas beneath city streets. Several street sections were closed based on incorporation of the drilling and seismic-test findings. In 2015, the KGS completed a survey on U.S. Highway 69 near Treece to evaluate mine-roof stability beneath the highway and plans a follow-up survey in 2020. Treece had such extensive soil and water contamination from past lead and zinc mining operations that its residents were offered a buyout by the EPA in 2009.

Using seismic methods related to ASI technologies, KGS researchers imaged the ground beneath and around sinkholes in Russell County related to underground salt dissolution that caused a significant slump in Interstate 70 and led to the eventual removal of an overpass. In Hutchinson, KGS geophysicists also helped identify the subsurface pathway of natural gas, which caused explosions and fires that killed two people in 2001.

A research and service division of the University of Kansas, KGS studies and provides information on the state's geologic resources and hazards, including groundwater, oil and natural gas, rocks and minerals, and earthquakes. Its main headquarters is in KU’s West District in Lawrence, and its Wichita office houses the KGS Well Sample Library.

Sign up for the Hays Post Morning News Update
Delivered to your virtual porch every morning — on time and free :-)